Would you pay 6 dollars for a product like Asparagus Water? Well Whole Foods seemed to think so when they put this exact same thing on sale recently. Even the most health conscious would bark at such a thing and think it was some kind of joke. It was however, no joke.

Asparagus is said to be one of the delicacies of the vegetable world and are full of nutrients and can even give your pee a certain kind of aroma.

One shopper in particular decided to post her disbelief on social media and it soon turned to Asparagus Watergate. What do you think about this?

When shopper Marielle Wakim, an associate editor at Los Angeles magazine, spotted the water sitting on shelves in a California Whole Foods supermarket, she had to stop to do a double take.

“Somewhere in L.A., Whole Foods executives are laughing at all of us,” she wrote on Instagram, posting a photo of the so-called “Asparagus Water” product. 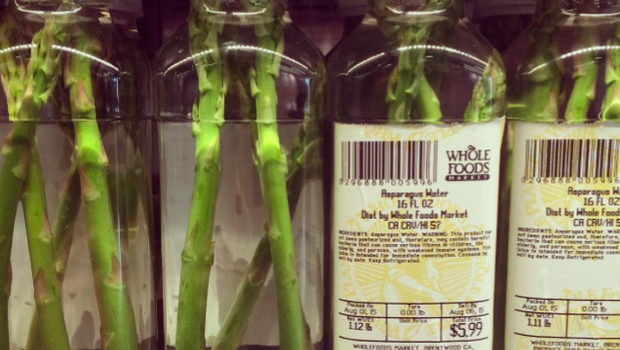 As an L.A. resident, Wakim is used to health food trends like kale soft-serve or “Swole Cakes,” but this product struck her as ridiculous.

“Tap water, after all, is free, and an entire bundle of asparagus from Whole Foods costs around $5,” Wakim said. “In fact, I was half-sure it was a joke.”

After thousands of people took to the Internet to discuss “Asparagus Water(gate),” Whole Foods addressed the outlandish item.

“We actually don’t sell asparagus water in our stores,” Whole Foods Market Senior Media Relations Specialist Liz Burkhart told CBS News. “We looked into the item as soon as it was brought to our attention.”

The water was “carried briefly” in just one store in Brentwood, California, but it has now been removed.

“It was meant to be water with the essence of vegetables and/or mushrooms (similar to bone broth), which is typically made over a long period of time soaking in water,” Burkhart explained. “It was made incorrectly and has since been removed.”

Wakim was relieved to hear that “Asparagus Water” was just a “snafu” on the grocer’s part.

“I’m sure people who saw it experienced some sort of sticker shock ($6 for a bottle of water?!) combined with disbelief that such a thing would even exist,” she said.

Fortunately, for Wakim — and other shoppers who got caught up in the great “Asparagus Water” debate — it no longer does.